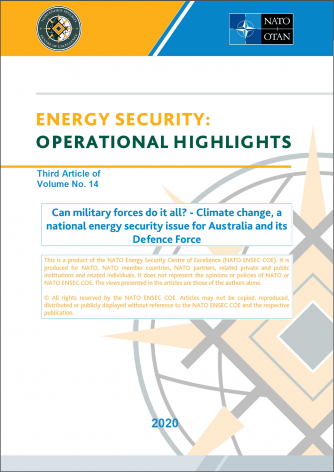 A significant increase in average annual temperatures in the 20th century, strongly challenged Australia with severe droughts and uncontrolled bushfires. This article considers that the nation facing negative consequences of global warming has to face the threats to Australia’s national security caused by climate change and focus on Australia’s climate policies and position on the Paris Climate agreement to understand the impacts on national energy security and the Australian Defence Force.

As this study implies, Australia covered with such challenges shoul concentrate on responding to them as well as the international demand for decarbonisation by taking into account its dependence on a carbon-based economy. Additionally, Australia’s principal matter should focus on maintaining energy security for the civil and military sectors under increasing threats from climate change.

According to the analysis of this article, some significant conclusions interfered, including adressed lack of political action on reducing carbon emissions, which impacts commercial and military cooperation and influences export and import trends as well as Australia’s energy security.